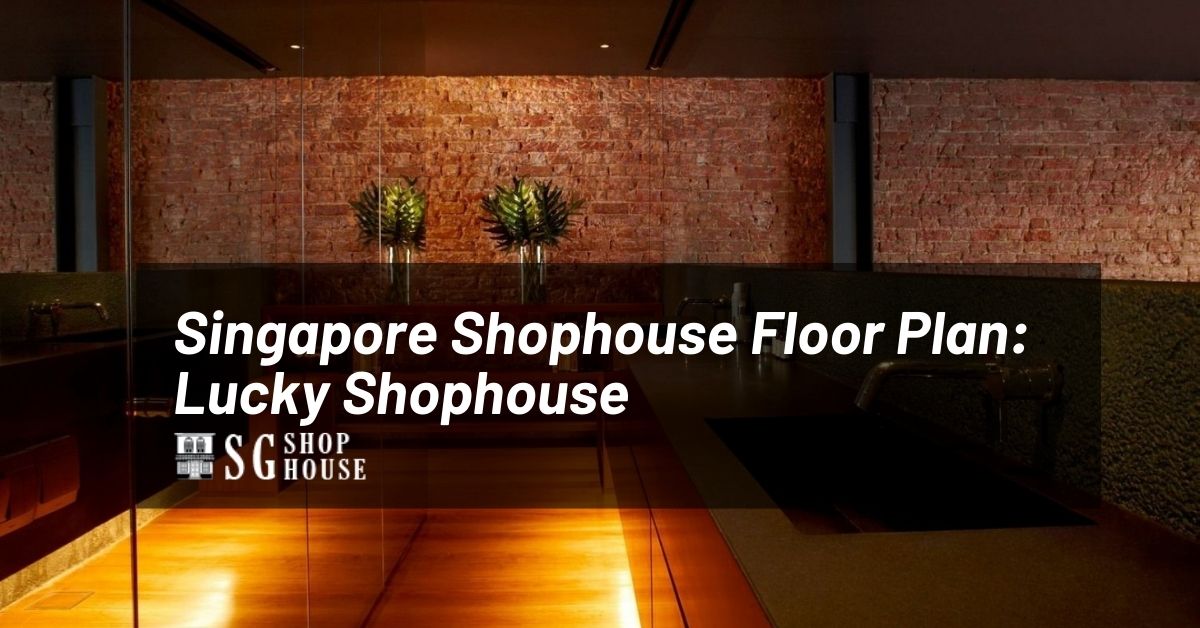 This project is the passion to retain the charms of a historical place in Singapore. This shophouse is located along Joo Chiat Place, in a conservation shophouse district in the secondary settlement areas of Joo Chiat and Katong in Singapore. The conservation guidelines for this area require the front portion to conserve and restore, while the rear portion can be redeveloped to a maximum of 4 storeys. For this stretch of shophouses, the guidelines require any new redevelopment to convert for residential purposes. Let’s have a look at the Singapore shophouse floor plan: Lucky Shophouse. Combining living quarters above a shop, the narrow shophouse fronted by a ‘five-foot way’ (a narrow public arcade) is the quintessential building type of Singapore and South-East Asia. Transforming an existing structure into a modern dwelling, this project reframes and recasts the shophouse, while preserving a strong sense of its vernacular origins. Built-in the 1920s, this shophouse used to be a book shop called The Lucky Book Store. The ground floor was the retail area, while the upper level partitioned for storage. Behind this shophouse was a long, narrow concreted vacated land. Surrounded by 3 to 4-storey service apartments and semi-detached houses, a portion of its side faces a back lane, franked by houses on both sides. Lucky Shophouse garnered a string of awards including the Unesco Asia-Pacific Award for New Design in Heritage Contexts. The owner is a couple, both having worked overseas and had plans to move back to Singapore. Both grew up in this Katong area and buying a shophouse in Joo Chiat was in many ways homecoming for them. This is a site where they could see their childhood days relived.

And so they purchased this shophouse, along with the rear vacant land. Together with their architect friend, the plan was to convert the shophouse into a dwelling place and to transform the concrete land at the rear into a garden where a single-storey house extension sits. The brief called for a flexible communal space where their extended family members could gather and stay. On the other hand, overlooking a long garden, a double-height dining space forms the focus of the remodelled dwelling. Within the garden is a new, single-storey guest house conceives as an irregular enfilade of rooms suffuse with natural light and the presence of nature. The crisp new language of concrete and glass plays off the gently weathered texture of the original structure.

Conserving the front shophouse resembled working on an archaeological site. Part of the brief was to retain traces of the old shop; to rediscover, reveal, and protect the original structures, finishes, and detailing. Coincidently, the couple remembered patronizing the Lucky Book Store during their growing-up years, browsing through comics, buying music cassettes, and stocking up on cheap chewing gum.

For the front façade, the multi-layered paint-coatings carefully removed to reveal its original tone and colour, and protected with transparent sealers to prevent the surfaces from flaking. The fading signage ‘LUCKY BOOK STORE’, spotted on a front pillar, retained as a reminder to what this place was.

Internally, non-structural partitions removed so that the spaces, the old brick walls, timber rafters, and floor joists, better appreciated. These were carefully restored, cleaned, and protected. A row of cavities on the walls left exposed to provide clues of how the spaces once configured, indicative of floor joists supporting a mezzanine for additional storage space. 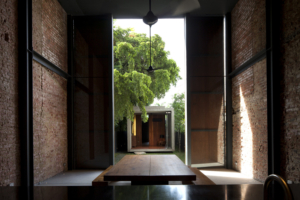 Where new columns added to support the extended roof over the dining area. These are detaching from the surface of the brick walls. The interface between the old and new brick walls made distinct to reveal the old party-wall profile. Fragments of the old boundary walls also retained as a reference to the original site configuration.

The overall layout kept simple to cater to flexible space usage. Furniture, fittings, and services placed on a central axis. Progress through the house is always to the side rather than along the axis. This frees the brick walls and maintains clear vistas on both sides that run 55m to the rear. The existing height kept, congruent with the neighbours’. The original second-storey slab for a side passageway leading to a corner toilet. It removed to create a double-volume dining space. This becomes the common, popular gathering space that visually connects the ground floor and the upper level. It also opens out to the central garden space and overlooks the new rear house extension.

This framed view is through a pair of full-height timber sliding panels. When open, the space extends into the outdoors. When closed, daylight washes the old brick walls, enhancing its textures and at the same time allowing the continuity of the vistas on two sides.

Beyond the shophouse is the concreted land that faces a back lane. Instead of maximizing built-up areas, both the couple and architect felt the need to keep the end of this back lane visually unobstructed. This leads to the creation of a central garden space, where the neighbours now enjoy a backdrop of green oasis. This central garden space extends to the rear where the new single-storey house sits. Essentially one-room thick, the decision to go low dense and to elevate its floor from the ground pleasantly increases the breathing and green spaces for this house and its surrounding.

The planning guidelines for the rear house require a 1m setback from each side boundary. This had also prompted the layout of the front shophouse in such a way that the vistas always open up to the greeneries of the rear house.

As the two side boundary walls are not parallel but tapered, a series of rooms organized intermittently. These are staggered to optimize internal spaces. The staggering creates vertical apertures for cross-ventilations, day-lighting, and access to the outdoor and greenery. These openings replace the conventional windows that face the neighbour directly. This helps to maintain privacy on both sides. Hence, to avoid situations whereby windows always closed with curtains drawn – not a very neighbourly sight. The enclosures of the rear house have a rustic finish made of stone aggregates to blend with its green setting. Also to compliment the timeless and rawness of the old brick walls of the front shophouse. The entire project economically constructed. It responds to the local tropical climate with low energy consumption as the spaces are generally day-lit and naturally ventilated. The final result brings back fond memories of the couple’s childhood days. The days of living in a community where homes interconnected social spaces; of spaces that were simple and adaptive. And how the rituals of everyday life enriched by architecture.

The outcome recalls the best aspects of the old shophouses, and how they situated and supported domestic life within a specific commercial and urban context. It also explores the potential of a familiar vernacular building type and how it can be reused in a way that respects and responds to its origins. And though Singapore now sees its future through the prism of new forms of high-density living, the shophouse still remains an important and cherished part of its urban fabric.

Jury members draw to the idea of adapting and transforming a historic building type so that it assumed a new relevance to the current era. They especially admired the project’s deft and restrained handling of space and materials, and the way in which the new elements meshed with and revitalized the original structure.

Shophouse Grille In Singapore That You Should Know

7 Famous Peranakan Shophouses That You Worth To Visit In Singapore
Notice: Undefined offset: 1 in /var/www/html/wp-content/themes/houzez/houzez/framework/functions/helper_functions.php on line 2226