The Historic District of Chinatown comprises four distinct sub-districts: Telok Ayer, Kreta Ayer, Bukit Pasoh, and Tanjong Pagar. I will introduce the history and character of the area and explains its growth from the 1820s, when it began as the first settlement of immigrants from southern China and southern India, until the immediate post-World War II period. Together with the other precincts south of the Singapore River, they made up what was known colloquially as the Greater Town (or Da Po, 大坡) of Singapore. Because of its architectural, historical, and social importance, the area was given conservation status on 7 July 1989. Let’s take a walk and learn why this area is
cherished by so many Singaporeans!

The origin of Chinatown is linked to Sir Stamford Raffles. In 1822, he formed a Town Planning Committee to plan Singapore Town according to ethnic groups. The area south of the Singapore River was allocated by sectors to Chinese and Indian immigrants of the same provincial origin and language groups. The Chinese immigrants came mostly from the south-eastern coastal provinces of China. Hokkiens formed the majority, followed by the Teochews, Cantonese, Hainanese, Hakkas, and Foochows. The South Indians also found their niche in this area, though subsequently, the center of Indian commercial and cultural life moved to Serangoon Road. Each group has left its mark on street names and places of worship. Today, most of Chinatown’s conserved buildings and shophouses have been restored to their former glory.

The Malay name Kreta Ayer (or Niu Che Shui, 牛车水) comes from the ox-drawn water carts that used to deliver water to the area. In the 19th century, this predominantly Cantonese area was known for round-the-clock entertainment with a concentration of teahouses, opera theatres and brothels. Today it is best known for its Chinese New Year and Mid-Autumn celebrations, street market, and bustling atmosphere. 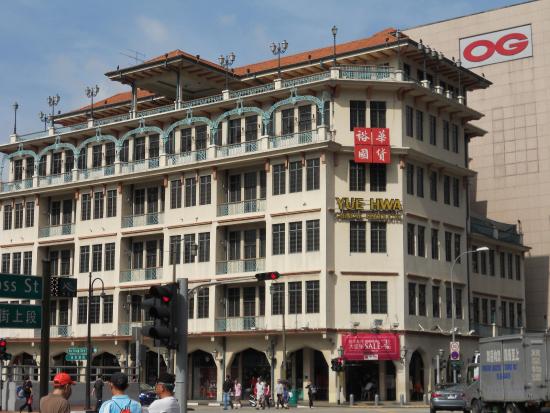 Address: 70 Eu Tong Sen Street
This former hotel was designed by architectural firm Swan & Maclaren and was once regarded as the Raffles Hotel of Chinatown. Popular with high society including celebrities from Hong Kong and China, it was once the tallest building in the area and was the first Chinese hotel in Singapore to boast a lift service.

Address: 80 Eu Tong Sen Street
This was originally a Cantonese opera house built by philanthropist Eu Tong Sen in 1927 for his wife after she was reportedly refused admittance to an opera performance elsewhere. A highlight of this Art Deco building is its decorated façade of hand-painted tiles depicting opera characters and flying dragons.

Telok Ayer, Malay for Water Bay, is the oldest sub-district. It started to develop in the 1820s and remained as the key Chinese commercial district until the late 19th century. The population in this area was predominantly Hokkien. The area is often associated with the laid-back atmosphere of Ann Siang Hill, and the religious buildings along Telok Ayer Street. 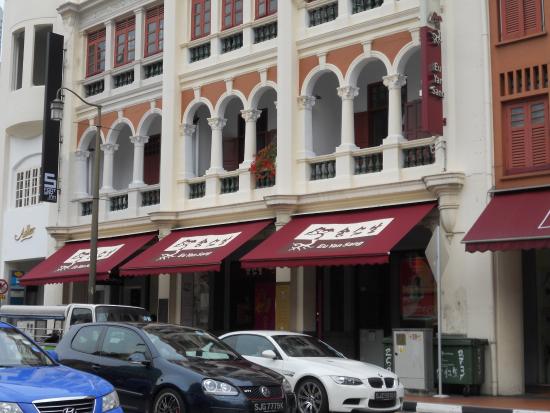 Address: 267 to 271 South Bridge Road
Built-in 1910, this is the first Eu Yan Sang outlet in Singapore set up by Eu Tong Sen. Besides dealing in the retail of traditional Chinese medicine, it used to offer money remittance services to China. The building was designed by Alfred Bidwell from the firm Swan & Maclaren. He was also responsible for the design of the Raffles Hotel and Victoria Memorial Hall. 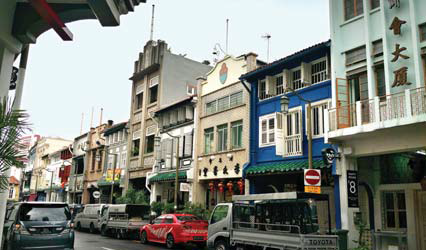 Address: Ann Siang Road and Club Street
Clan and trade associations were important institutions for mutual assistance in 19th and early 20th century Singapore as they helped new immigrants from China settle down and looked after their welfare. Along Ann Siang Road and Club Street are numerous clan and trade associations were stepping into one, time seems to stand still. Some still retain their meeting halls filled with portraits of members from the past and century-old furniture. Some of these associations can be found at 17 (Ching Yoon Wooi Kwoon) and 25 (Kwong Wai Siew Li Si She Shut) Ann Siang Road, and 84 Club Street (Nam Sun Wui Kun).

Bukit Pasoh was developed at the turn of the 20th century as an extension of the already densely populated Telok Ayer and Kreta Ayer areas. Its name means Pot Hill in Malay, referring to its origins as a place where earthen pots were made. Its charm lies in its gently sloping and curving streets fronted by shophouses that house a mixture of institutional and commercial activities.

The association was founded in 1879 at Upper Cross Street with financial assistance from Hoo Ah Kay, a well-known community leader from the Whampoa district in Guangdong province. The association relocated to New Bridge Road in 1917. The building is a hybrid of NeoClassical and Art Deco styles which were popular with Chinese developers in the past who wanted to project a modern image. To the Chinese, New Bridge Road was colloquially referred to as Da Po Er Ma Lu, Mandarin for Greater Town’s Second Road. The first road referred to in this instance was South Bridge Road.

This Cantonese clan association was established in 1839 at Upper Chin Chew Street and moved in 1924 to the present building, designed by Westerhout & Oman. During the Japanese Occupation, the custodians volunteered the building as a clinic and hence its antique interiors remained intact. The association is well known for its lion dance
troupe and martial arts. This is one of Chinatown’s first community museums and entry is free. 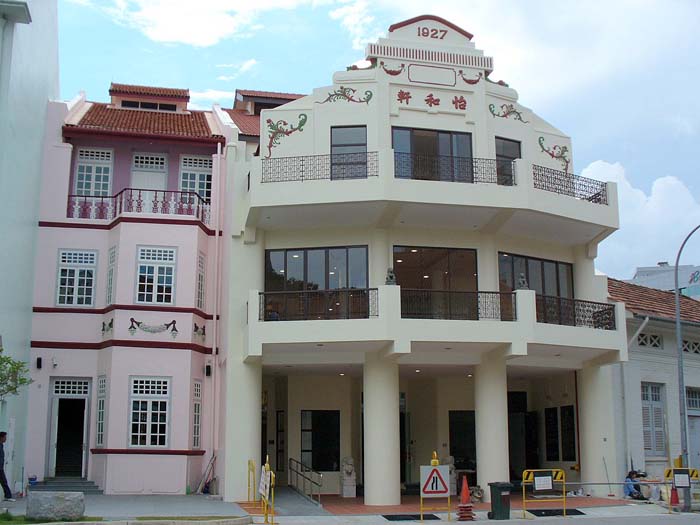 The club was founded in 1895 by a group of Hokkien community leaders for the wealthy Chinese elite. More than a social and business club, its members were actively involved in the political development of China in the early 20th
century. It supported the 1911 Xinhai Revolution which overthrew the Qing Dynasty, leading to the establishment
of the Republic of China. During World War II, it was the headquarters of the antiJapanese China Salvation Movement in Southeast Asia. The ground floor Pioneers’ Gallery is open for visit and entry is free.

Tanjong Pagar in Malay means Cape of Stakes, a name that reflects its origin as the site of a fishing village. It was with the opening of docks nearby in the mid-19th century that accelerated the development of the area due to its location between the docks and town. Today, the area is popular with eateries, entertainment joints, and wedding boutiques. 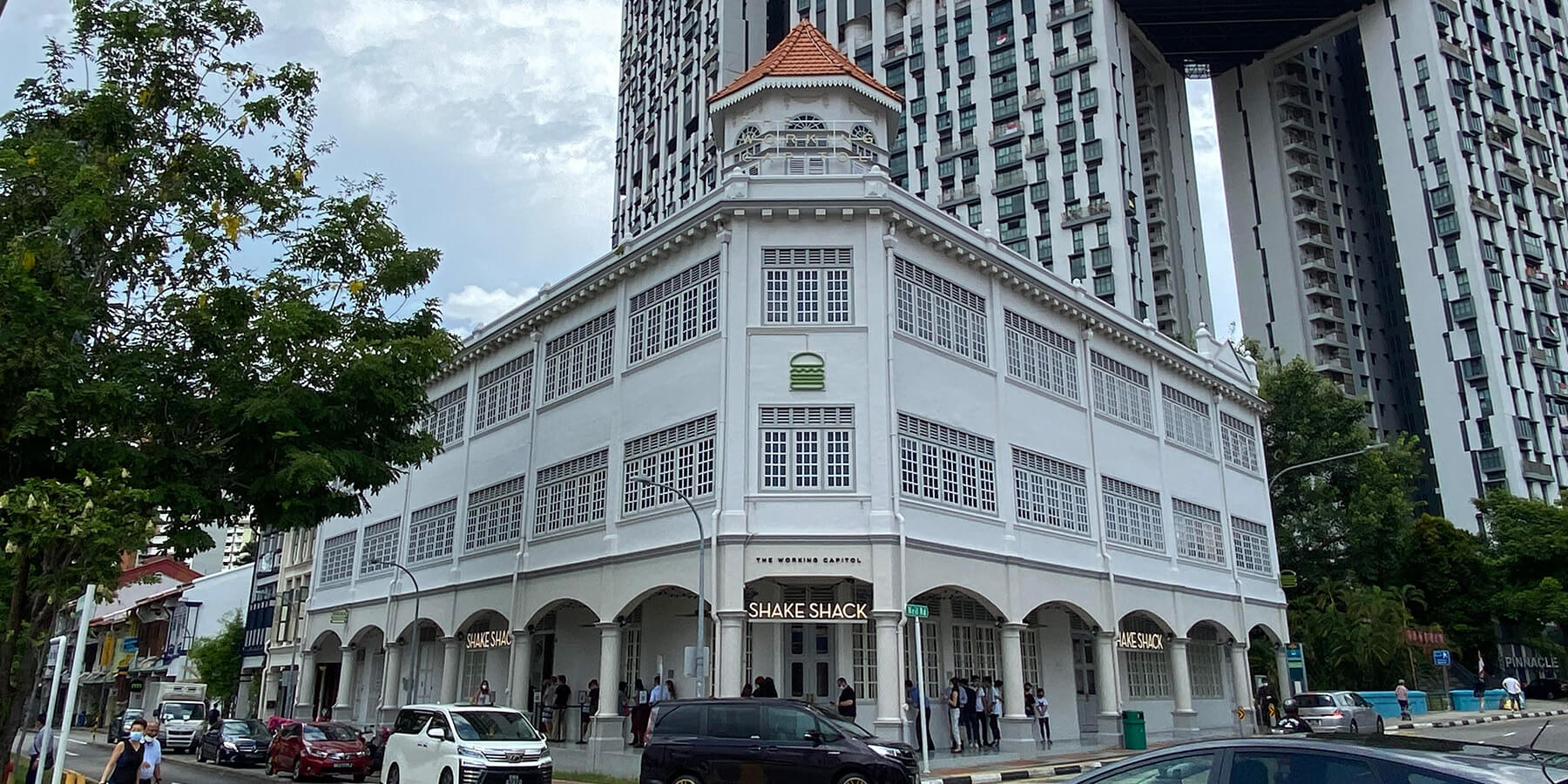 Address: 89 Neil Road
Eng Aun Tong (Hall of Everlasting Peace) was built by Aw Boon Haw in the 1920s as a factory to produce the internationally renowned Tiger Balm. This is one of the few flat-roofed buildings from before World War II. On
the roof is a six-sided pavilion, a reference to the six-sided glass bottle that Tiger Balm is sold in. Between 1987 and 1988, 32 dilapidated shophouses of a hybrid Hokkien-Teochew style were restored by the
Urban Redevelopment Authority. This was the first-ever project undertaken by the government to demonstrate to the private sector that it was technically possible and commercially viable to restore Singapore’s heritage buildings to their former glory. The first unit to be restored was 9 Neil Road and converted into a teahouse that hosted Queen Elizabeth II on her State visit in 1989.

5 Types of Shophouses in Singapore Come with History