5 Types of Shophouses in Singapore Come with History Shophouses first appeared in Singapore when the Town Plan of Sir Stamford Raffles dictated the subdivision of the land into smaller regular lots. They were narrow, long terrace houses with varied facades, creating an attractive unified streetscape. The shophouse was built to be flexible, either to be used entirely as a home, or a home upstairs with a shop downstairs. It can be thought of as the original ‘home office’!

They were built by Singapore’s pioneers and showcased the many cultural influences of the early builders who bought land from the East India Company. They were built for sale or rented to new immigrants seeking their fortunes. From the 1840s to the 1960s, shophouses moved through many different styles, from the Early and
Late Shophouse to the Art Deco and Modern Shophouse. These traced Singapore’s evolution from a trading port into a city as they moved from their glorious early days to a deteriorated congested state. With the conservation efforts of owners, many of them have been rejuvenated today.

Shophouses in Singapore Come with History

Across the island, the Singapore shophouse is a quintessential architectural icon still widely used for residential and commercial purposes. It remains a visible canvas that portrays Singapore’s intriguing multicultural and architectural influences throughout the years. The origins of the Singapore shophouse trace back to China, particularly the Guangdong and Fujian provinces where a majority of early immigrants to Singapore came from. Early Chinese immigrants to Singapore brought with them blueprints for their homes. The “bamboo houses” (houses with long and narrow floor plans) of Southern China evolved into the shophouses we see in Singapore now. Merchants would set up their businesses on the first floor while reserving the upper levels for accommodation. Over time, the richer towkays built purely residential townhouses for themselves but still modelled it after the shophouse.

Today, acquiring a shophouse can burn a multimillion-dollar hole in your pocket. We go past shophouses almost every day. But do we know the difference between the different designs?  Local shophouses can be broadly categorised into 5 categories: Early, Transitional, Late, Art Deco, and Modern. We demystify these iconic buildings: 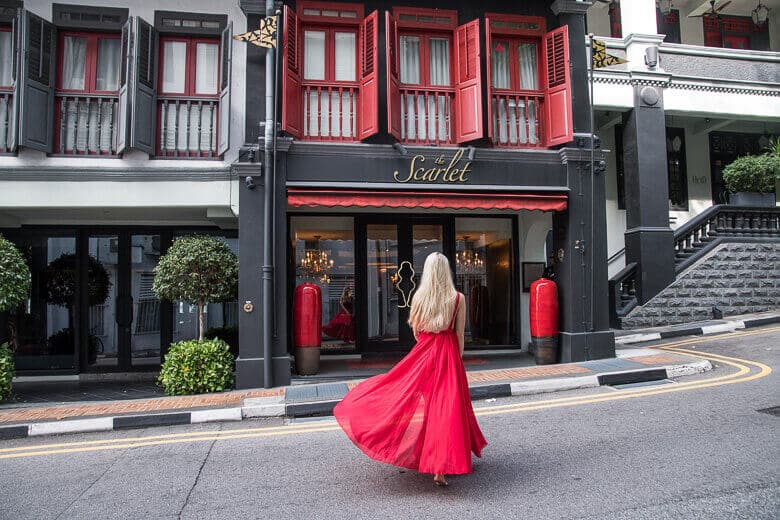 Buildings in the Early Shophouse Style are usually low (two storeys) and squat, typically with only one (at most two) rectangular windows on the upper floor. It is characterised by minimal ornamentation, usually of an ethnic nature. The earliest form of a shophouse was documented in 1840 and it was a bare-bones, no-frills affair. They had 2 storeys, a five-foot way on the first floor, wooden jalousie (shuttered) windows, and clay-tiled roofs. Materials used for the construction were most likely locally sourced. Add the cheap labour into the mix and you’d have a pretty cheap yet decent abode. This style is typified by a low and squat two-storey building with one or two windows on the upper floor façade. The rectangular windows and doors are timber-framed with shutters of boards, panels or louvres to aid ventilation.

Where can you find them?

The (almost) monochrome shophouses along Erskine Road are a perfect example of the simple yet pragmatic Early style.

Fast forward a few decades to the early 1900s and the first generation of immigrants have more or less settled here. They yearned to build more permanent, substantial homes for themselves. Shophouses became taller, more brightly coloured, and began to see more facade ornamentation like decorative panels and carvings, although they were still relatively simple and restrained.

Windows and doors are usually timber-shuttered although small plates of glass in the shutters became increasingly common. There are often two windows on the upper storeys and transoms are flat-arched or semi-circular. Vents are squares or diamonds between windows. 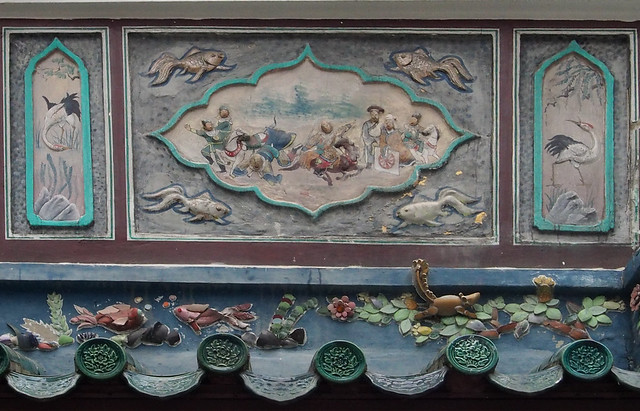 This has a simple and streamlined design as the designers and builders began to simplify the ornamentation. Late style motifs such as ornately carved transoms and colourful ceramic tiles are often combined with Art Deco elements such as cross-braced glass window panels and simple geometric balustrade designs.

This style made a comeback in the late 1930s, possibly in response to the dire economic slump that was the Great Depression.

One example of surface decoration is the jian nian (剪粘) mosaic (see below). Ceramic or porcelain pieces were cut and pasted onto a plaster base to depict animals and flowers. Jalan down to 157 Neil Road and be blown away by the Baba House – Singapore’s most famous Peranakan dwelling. Once the home of a wealthy shipping merchant, the Baba House has been restored back to its original shade of electric blue as well a beautiful array of jian nian phoenixes and peonies. Transitional shophouses with a wide array of Chinese decoration can also be found along Stanley Street.

At the same time, shophouses began to acquire a classical taste, with window vents and carvings that would not look out of place in Greece. Plaster was also used extensively to create super lavish ornaments like garlands and floral motifs. This is the most spectacular style, particularly in its extensive use of decorative mouldings, pilasters, carved wood-work and imported glazed tiles on the facade. The design and craftsmanship represent a successful fusion of the East and West in architecture.

But why stop there? Early Chinese merchants very cleverly zhng their houses to incorporate local influences like auspicious animal and floral motifs, giving them a distinctively schizophrenic look which came to be known as Singapore Eclectic.

Where to find them?

Many Late style shophouses can be found in the Little India/Jalan Besar area, especially along Sam Leong Road. Tucked away on Petain Road are some of the finest examples of Singapore Eclectic shophouses. They feature a blend of Spanish glazed tiles, Chinese animal reliefs, and Malay eaves. 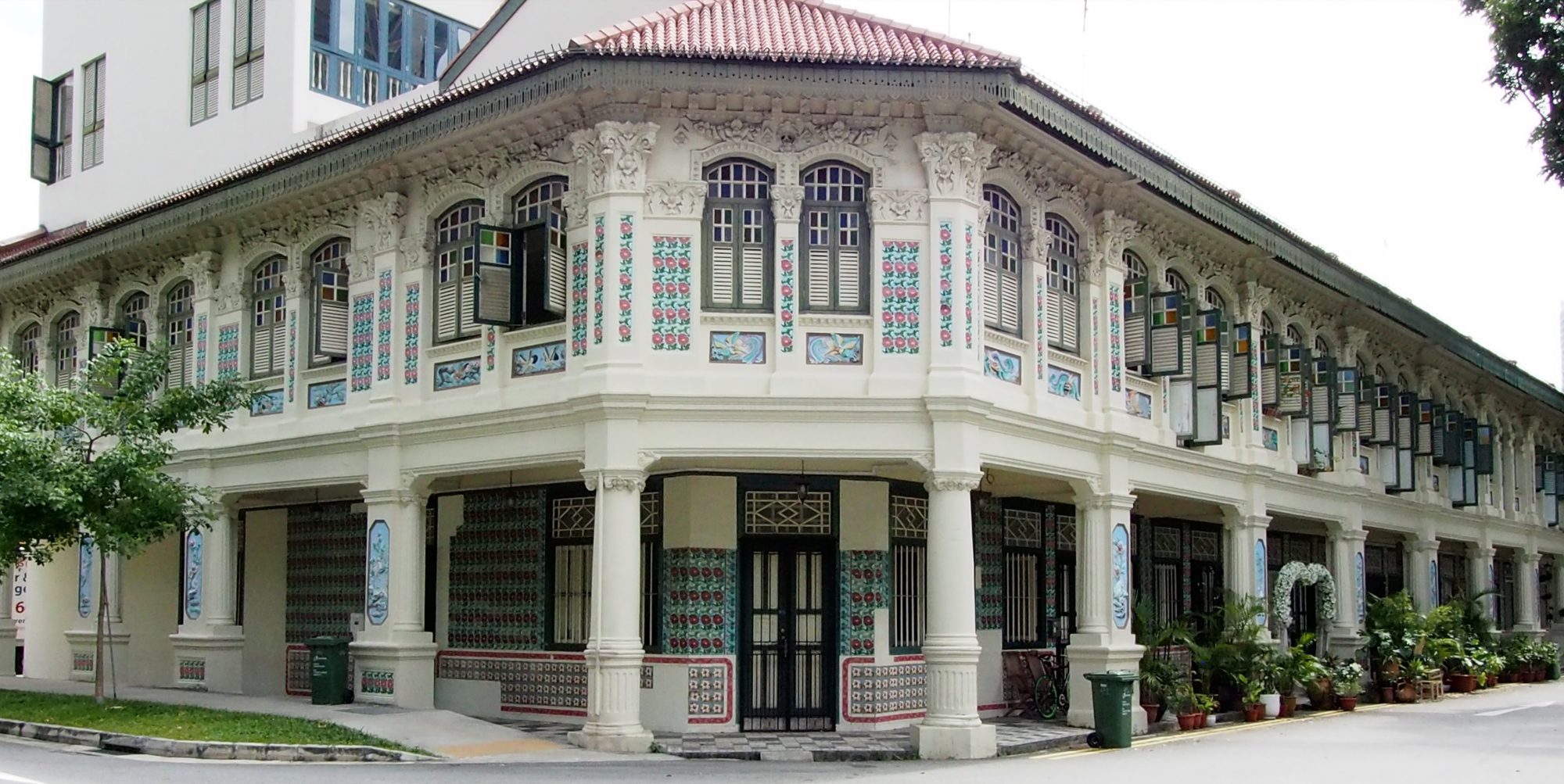 Always a party on Petain Road.

Next, hop on down to Lorong Bachok to find another beautiful example of Late style shophouses. These feature a dizzy array of weird animals as well as a symbolic pair of Sikh guards on the two front pillars. Sikhs were employed during the colonial era as guards because of their sense of honour and integrity. 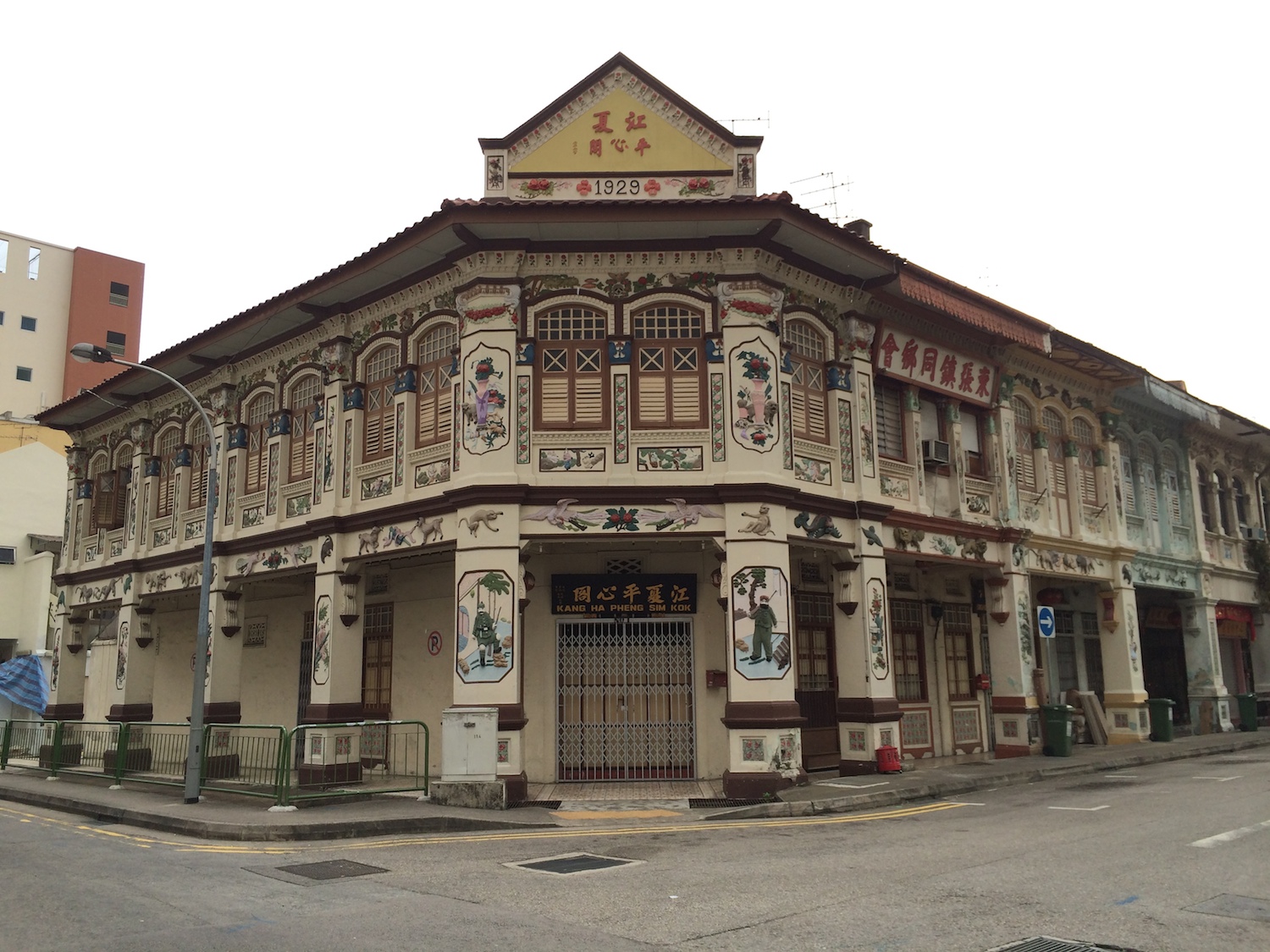 By the mid-1900s, modern advances in technology in the world, as well as post-war economy, started to exert influence on shophouse architecture. As the world was introduced to airliners, ships, and motorcars, shophouses also began to reflect the wonders of the Machine Age. Hallmarks of this style are the simple geometric design on the facade. It is also typified by the streamlining of classical motifs such as capitals, arches and keystones. The organically inspired ornamentation of the earlier periods was discarded in favour of more streamlined designs, curved corners and strong horizontal lines. Geometric shapes, zigzag roofs and flagpoles were also common.

Where can you find them?

Other then Tiong Bahru, Art Deco shophouses can be found in Bukit Pasoh – most notably the Dong Ya building, which now houses Potato Head. An adaptive form of Art Deco, termed Tropical Deco can also be found in shophouses along Club Street and Cavan Road. 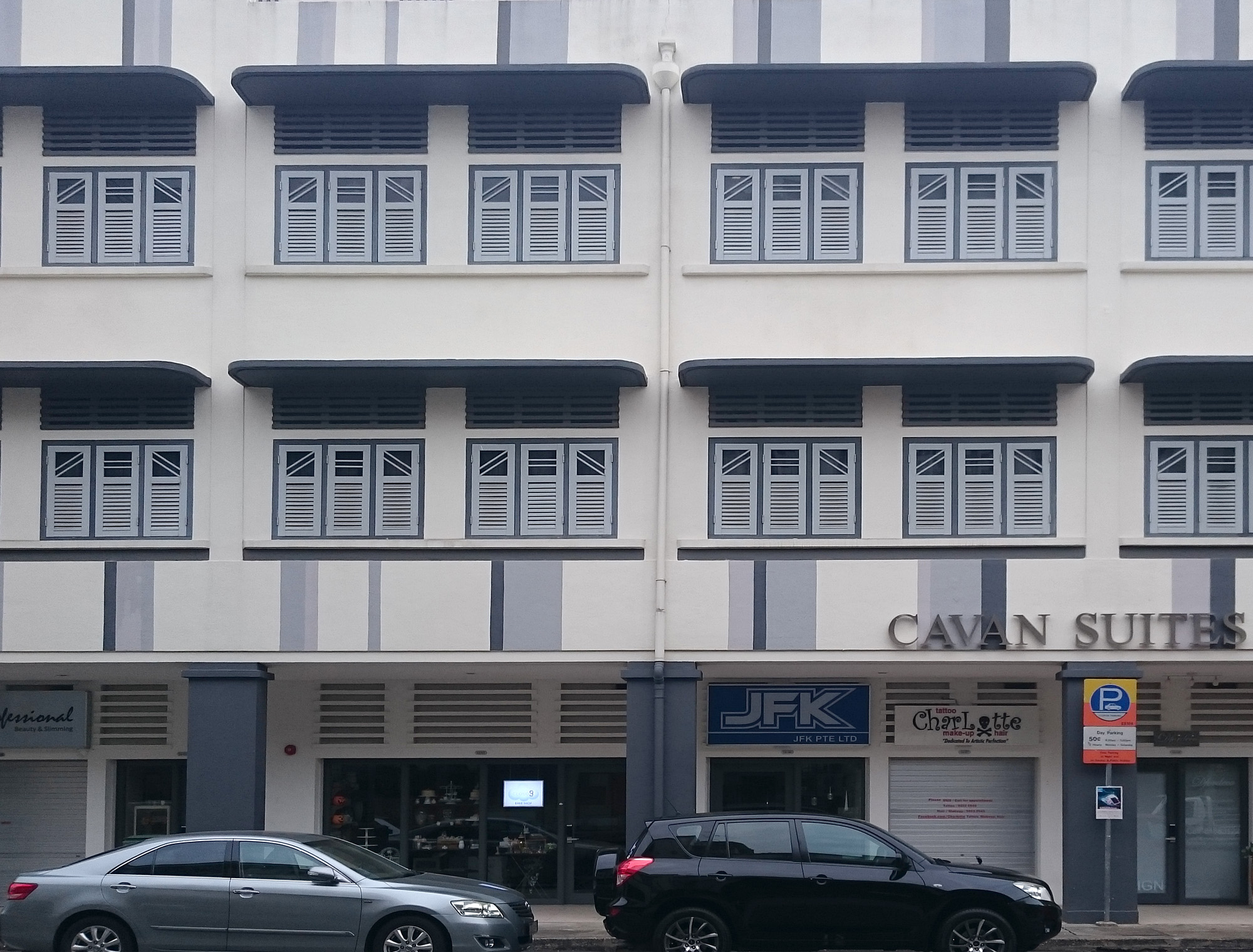 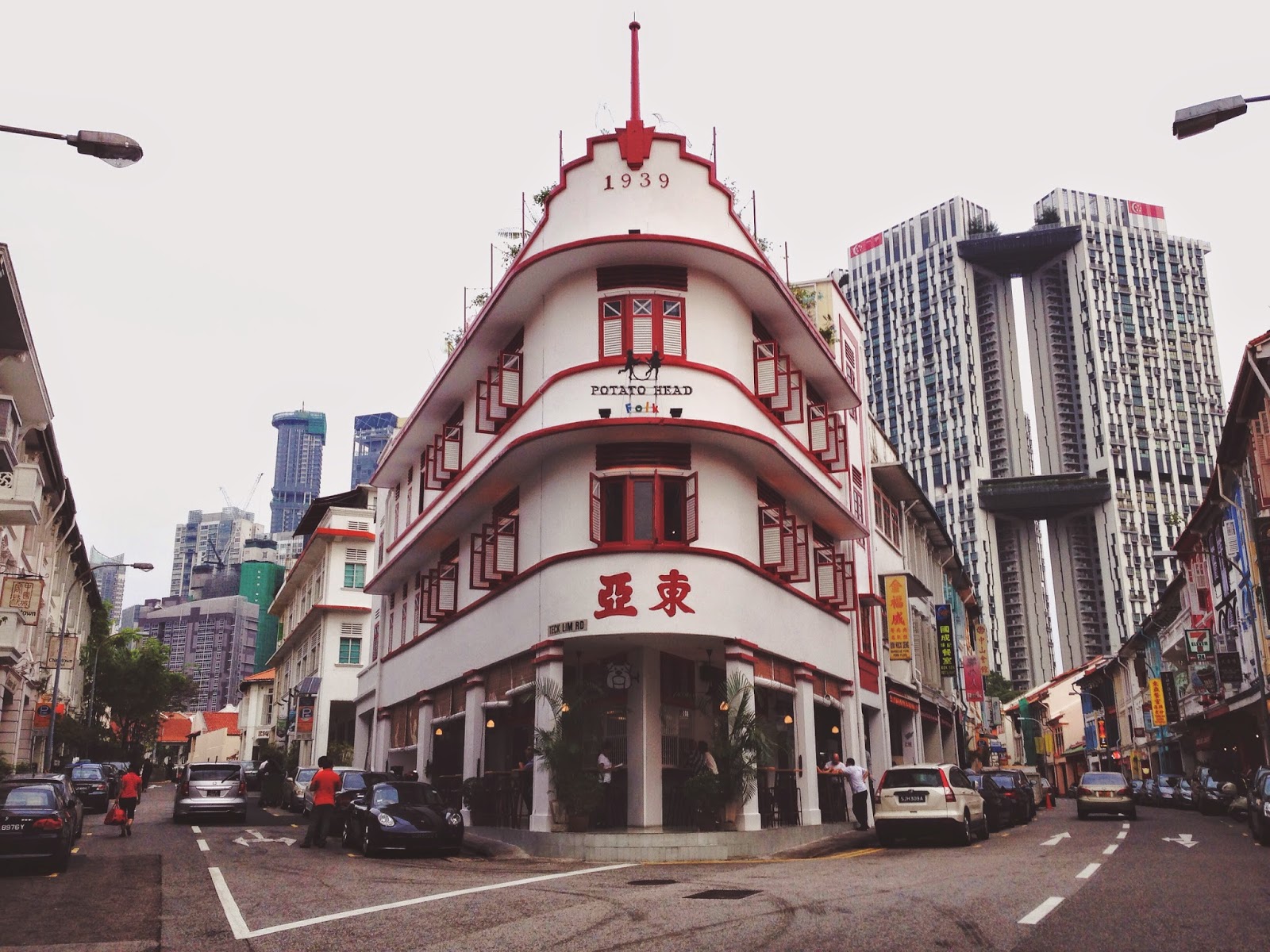 Geometric designs continued into the post-war period. By then, shophouses took on a more functional design. Air vents, for example, took on functional as well as decorative purposes. Modern materials were used – concrete for the walls, and steel for the windows. The roofs of modern shophouses also tended to be flat. This features the innovative use of very thin concrete fins and air vents on the building facade that are functional as well as decorative. The windows are well proportioned and complement the geometric design of the facade. 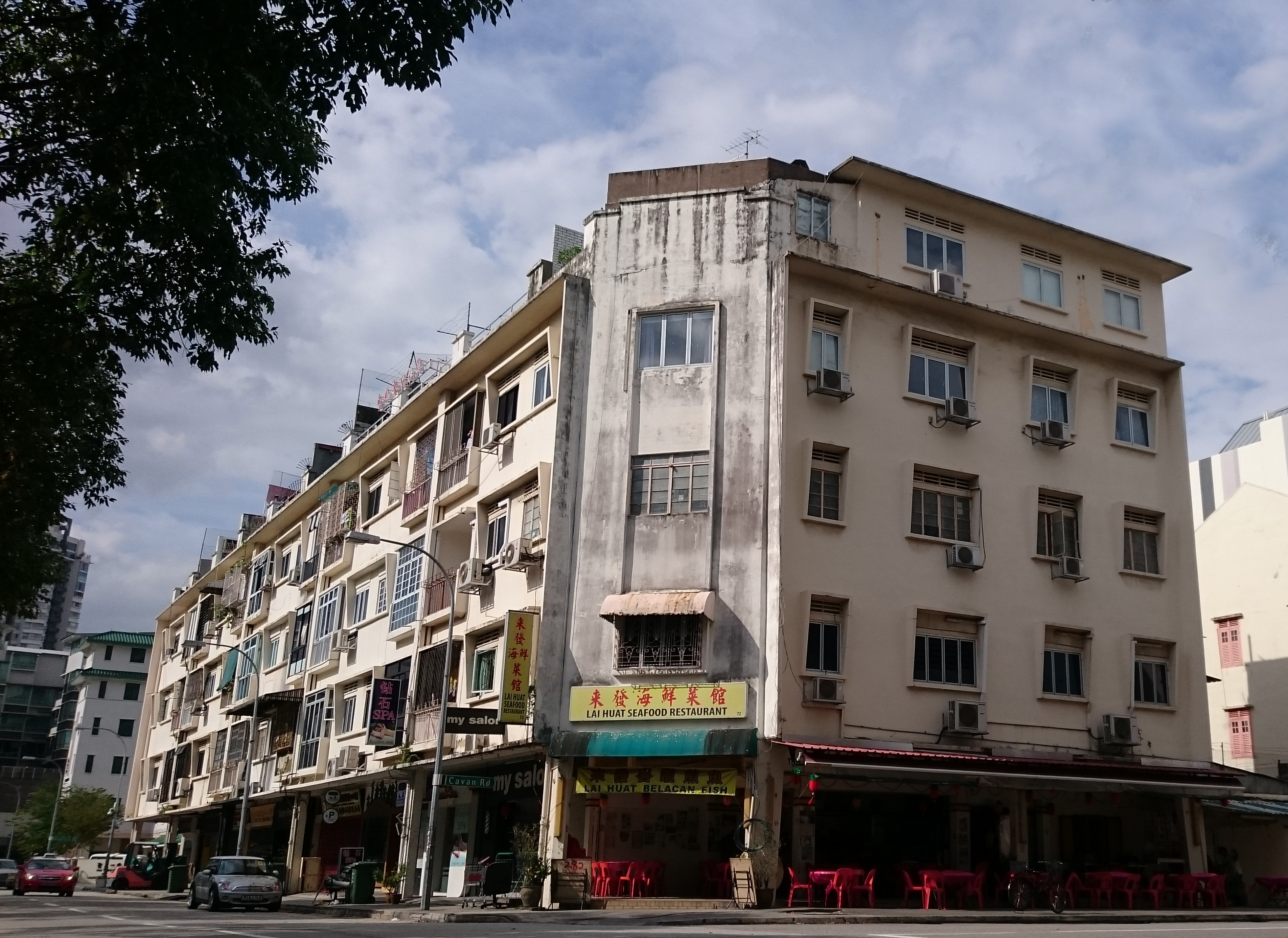 Today, the external facades of shophouses may remain the same, but peek inside and you will find a diverse range of functions – temples, clan associations, guilds, kopitiams, bookshops, bars, museums, and of course homes. The next time you venture past a shophouse, take your time to linger over the carved front gates, or perhaps a Peranakan-inspired window vent – they can tell you stories of a bygone era.

7 Famous Peranakan Shophouses That You Worth To Visit In Singapore