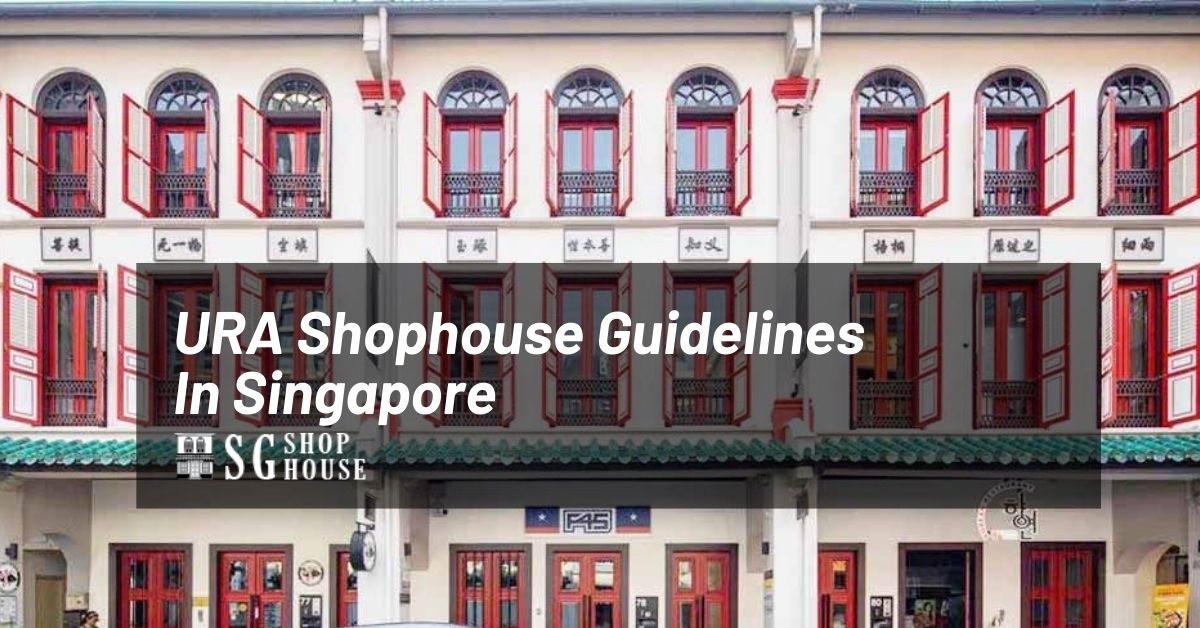 Shophouses—a historical source of delight and nostalgia—are a prevalent building type in Singapore’s architectural and built heritage. These buildings are generally two- to three- storeys high, built-in contiguous blocks with common party walls. They are narrow, small terraced houses, with a sheltered ‘five-foot’ pedestrian way at the front. Constructed between the 1840s and the 1960s, these shophouses formed the majority of the pre-World War 2 urban fabric of the old city centre as well as several other parts of Singapore. They are also commonly found throughout the historic cities of South East Asia. Shophouses therefore form the bulk of our gazetted conservation buildings. The key elements of the shophouses have been carefully restored and conserved according to our conservation guidelines. In this article, you will know the URA Shophouse Guidelines In Singapore. 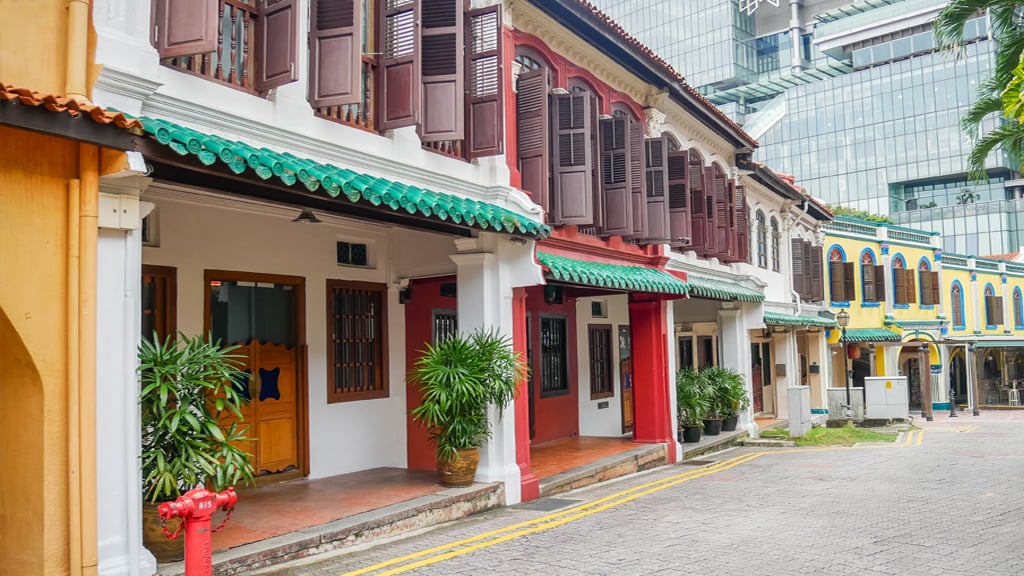 URA Shophouse Guidelines: Roofs pitched and finished with overlapping V-profile or flat natural color unglazed clay tiles. Besides, laid on timber battens, and bonded with mortar. Where the tiles end at the edge of the front and rear shophouse roofs, they often covered with a timber fascia complete with galvanized iron gutters and downpipes. In fact, roofs waterproofed using bituminous asphalt, galvanized iron flashing, and copings.

Besides, the secondary timber beams supporting the timber floorboards for the upper floors serve as horizontal structural members to evenly distribute the dead and live load from the upper floors to the party walls. The timber floorboards are thin horizontal structural members laid horizontally on the secondary beams and joined to one another by the traditional tongue and groove method. Timber rafters inclined structural members supporting the pitched roof. Thus, they are in turn supported by timber purlins or roof beams spanning between the party walls.

URA Shophouse Guidelines: Air wells positioned between sections of the tiled roofs. They open directly to the sky to provide natural ventilation and lighting to the interior. Hence, the air wells lend interest to the spatial experience of shophouses by offering alternating naturally-lit spaces.

The rear court is an open space at the back of the shophouse bounded by the rear boundary wall, the service block, the rear facade of the main part of the shophouse, and the party wall. The juxtaposition of these elements produces several different rear court configurations.

Besides, the windows in the walls facing the rear court allow light to penetrate into the interior of the shophouse. They are normally casement windows of a design compatible with the windows on the front facade. The existing doors on the rear facade are either timber doors or original metal (mild steel) doors. URA Shophouse Guidelines: Shophouse windows include the timber windows of a French or casement design. French windows, found on the upper storey façade, are full-height, side-hung and double-shuttered. And, may feature transom windows or fanlights above them. The timber post and rail or cast-iron balustrades are part of the original design of the French windows. However, casement windows are only half the height of French windows, with openings starting at the balcony rail height. Casement windows on the first storey, unlike those on the upper storeys that swing outwards. It always open inwards and recessed to allow for the installation of security devices.

The Upper Floor that projects over the five-foot way to form a covered pedestrian arcade.

The Columns at the front of the building that form the five-foot way colonnades and support the upper floors. 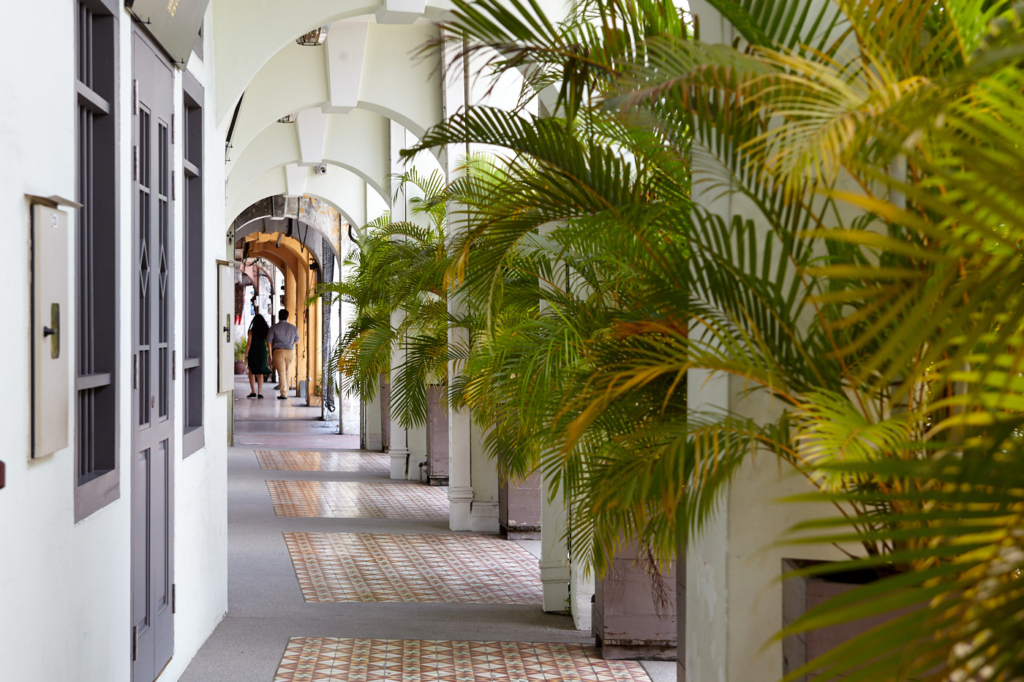 URA Shophouse Guidelines: The Five-foot Way which serves as a sheltered space for social activities and for circulation. It is an important element that contributes to the experience of walking through a conservation area. Besides, the elements that contribute to the experience are the floor, colonnade, residential or shopfront, and the ceiling. In order to retain the traditional character of the five-foot way. The original height of the covered walkway, the design, and the size of the columns to retain.

In addition, the retention or reintroduction of the traditional materials and finishes of the five-foot way encouraged. Traditional finishes for the five-foot way floors. Such as cement screed, terra cotta tiles, clay tiles, cement terrazzo, mosaic, marble-chip terrazzo, or granite slab. The five-foot way often features granite edging parallel to the roadside drain and granite steps. Tile patterns used on the five-foot way sometimes repeated on the front wall of the shophouse. It is either ending as a skirting or under the window to form a decorative wall.

Where the existing floor finishes are not original, traditional materials are to consider. The selection of the floor finishes preferably matches the architectural style of the shophouses. For instance, it is common for Early Style shophouses to have red-colored cement. Such as screed with gridded rope indentations and granite edge slabs. Art Deco shophouses may have marble-chip terrazzo finish in a variety of colors or mosaic finish. Therefore, it is untraditional for five-foot ways to finish in ceramic tiles or slate.

The Timber Windows on the upper storeys evenly spaced across the facade. Also, they are either French windows or casement windows with timber shutters, louvred shutters hinged on the timber window frames.

URA Shophouse Guidelines: The Roof finished with natural color unglazed V-profile or flat clay tiles. It is complete with a timber fascia and galvanized iron gutters and downpipes. The pitched roofs supported by timber purlins which are set onto the load-bearing party walls.

URA Shophouse Guidelines: The First Storey may be a residential front or an open shop front. Residential fronts characterized by a double-leafed timber door flanked on both sides by timber casement windows. Or, by two double leafed timber doors and a timber casement window. The main door often has a pair of half-doors, known as ‘pintu pagar’, which often intricately carved. Besides, the timber-framed windows usually have timber paneled shutters, which open inwards, and vertical iron security bars.

Shopfronts have a range of traditional features. For example, demountable timber shutter boards, timber or metal sliding and folding doors, or glass display cases. Access doors incorporated into the shopfronts and these may be single or double-leafed. Besides, glazed or timber-paneled, louvred, or of rail and stile design.

Some residential terrace houses also feature a Forecourt. In fact, the forecourt is an important feature that gives spatial and green relief to the usual narrow street lined with traditional houses. Some forecourts feature ornamentation on walls and gateposts and have decorative gates and entrance arch with lamps. Source: URA

In the Singapore context, conservation guidelines applied in different degrees to the different groups of conservation areas taking into consideration their historical significance. The context of the surrounding developments, and the long-term planning intention for each area.

This document provides the conservation principles, planning parameters. Also, restoration guidelines for conserved shophouse and bungalow building typologies. Besides, as well as planning parameters and envelope control guidelines for new buildings within conservation areas. Owners, architects, and engineers intending to carry out restoration works or development within conservation areas. They required to comply with the guidelines accordingly. For other building types, which do not conform to the standard shop house or bungalow typology. These will be evaluated on a case by case basis in accordance with conservation principles1.

Colorful Shophouses In Singapore That You Should Know