Exploration Of Shophouse Malaysia vs Singapore

The shophouse can be defined as a row house. It is the basic program of having a shop on the ground level with living quarters above. Typically, the width of each shop is between 13’ – 25’ along the front facing the street while the depth of the shophouse spans two to four times that dimension. The narrow but very deep plots necessitate a rather specific layout that can be traced across the majority of shophouses. The front of the shop is always dedicated to the business aspects, sometimes spanning the entire depth of the first floor. Oftentimes, designation of the rear half of the ground floor for storage, office, or kitchen space for the shop. The back of the shophouse opens up into a back alley passage that is the domain of the shop owners and residents sometimes including an open-air kitchen or garden
space. Let’s explore Shophouse Malaysia vs Singapore together. 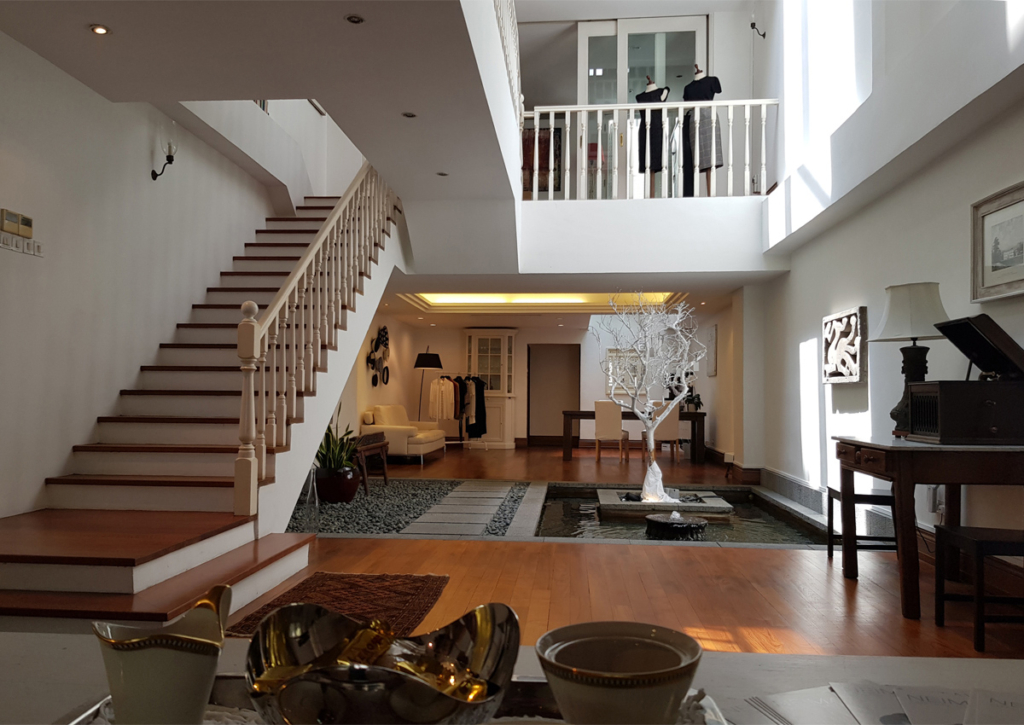 To facilitate ventilation through the narrow and often cramped interior, full-height walls rarely separate the interior rooms and it is quite common for the full span of the ground level to be completely open. Oftentimes wedge a single narrow staircase into the limited space and sometimes resembles more of a ladder than a grand stair. Because the ground floor is a place of business, the stair always faces toward the back of the shop to give some sense of privacy to the entrance into the residential quarters above. Introduction of Tianjin, or air wells to facilitate airflow between levels as well and bring natural light into the center of the shophouse. Because the shophouse grew in popularity, and their owners in economic prosperity, we know the depth of the shophouse to reach over 150’, causing the
need for two to four air wells to maintain livable conditions.

The longest recorded depth of a shophouse is in Malacca where shophouses grew to reach depths between 100’ – 200’. With the increase in prosperity, the family also expanded. Considering that the longstanding tradition of polygamy in both Chinese and Malay cultures. Sometimes this meant that there were several wives and their children occupying a single house. The shophouse was so long and narrow. Hence, the various family units within a single household would occupy different sectors laterally along the length of the building. The air wells often contained stairs. It served as vertical connectors between floors as well as central hubs around which the family would circulate. Just as the traditional Chinese courtyard houses, or siheyuan. It revolved around the center court as a space for access to light and nature and had significant symbolic meaning. We can well see the air as the hinge upon which the shophouse orbits.

Upper Floors Of The Shophouse

The upper floors of the shophouse are typically simply organized. The narrow space means that arranging the rooms sequentially taking up the full width of the building. There was no introduction of the modern inventions of air conditioning, thermal and noise insulation until much later in the shophouses’ development. Thus, intend the arrangement of rooms to take full advantage of access to natural light and ventilation. Typically, place the bedrooms both at the front of the building and the far back. This is to offer some privacy through distance. The row house shares a party wall to either side, the front and back are the only points for windows. Thus, the best light and air. Add on washrooms in the rear to prevent water damage to the structure. Hence, it allows for maximum ventilation to prevent mold which is a major concern in tropical climates.

Since the economic incentives through trade, the commercial nature of the shophouse caused it to become the primary housing type introduced in Malaysia by the Chinese immigrants. The shophouses were located along major commercial axis within the city center with broader commercial streets. They can conduct business in the front and narrow back alleys. It allows for the movement of goods in the back. According to the standard practice of both the Chinese and Malay the kitchen was situated in these back alleys. It was often open air to prevent heat buildup and offer some protection from fire. Malaysia is located directly over the equator and experiences the full effect of the tropical climate. Local builders learned that it was much better for business if there was some form of shelter offered over the entrance of the shop to protect from frequent and often torrential rains.

The combination of the traditional Malay porch and Chinese arcade eventually became one long interconnected walkway between shops that spanned the length of the street. It was not until the British intervening however that the arcade walkway became regulated. Sir Stamford Raffles is notable for having founded the colonial outpost in Singapore. Upon his absence for a few years, he was dismaying to return to the haphazard and undisciplined development of the city. As a result, the Town Plan of 1822 was drafting which systematically laid out the future development of Singapore. It served as an example for many cities throughout Malaysia. Under this plan, the covered walkways were to be a minimum of five feet wide. It is the Raffles five-foot ways.

It is obvious when the shophouse makes this typology particularly beloved to the region is what happens on the façade. The nature of every aspect of life in Malaysia is a dichotomy between the fusion of various cultures and the proud upholding of individual ethnic backgrounds. Examining the shophouse as a national architectural archetype reveals both streams of influence in the façade arrangement. Southeast Asia can be characterized as a crossroads in maritime trade that made it a hub of cultural exchange. Picking up ideas from the traditions of China to the latest trends of Europe, and yet far removed from the rules that dictated these styles, Malaysia became a petri dish for any mixture of elements that struck the builders fancy. During the economic boom of the height of the colonial period in Malaysia the shophouse only became more popular. The densely packed nature of the shophouse meant that both people and good saturate commercial areas. It is a mutually beneficial relationship. As suggested by the latter description, the introduction of large changes in this period due to the adaption of Chinese style to the Malay region. It was during this style period that the walkways became much more common. Ornamentation remained rather restrained. However, European Classical elements began to make an appearance with simplified Tuscan or Doric pilasters and cornice moldings. Symmetry was a key aspect of Chinese design which remains a strong influence. A commonly seen composition is centered double doors flanked by paired windows with bat-shaped vents above as a vivid token of their Chinese legacy.

Shophouses—a historical source of delight and nostalgia—are a prevalent building type in Singapore’s architectural and built heritage. These buildings are generally two- to three- storeys high, built-in contiguous blocks with common party walls. They are narrow, small terraced houses, with a sheltered ‘five-foot’ pedestrian way at the front. Constructed between the 1840s and the 1960s, these shophouses formed the majority of the pre-World War 2 urban fabric of the old city centre as well as several other parts of Singapore. We commonly can find throughout the historic cities of South East Asia.

Shophouses of this style are shorter and have one or two timber windows on the upper storey facade. The early
builders made use of locally-sourced construction materials. Plaster ornamentation is minimal.

With increased wealth and an influx of skilled labour, shophouses became taller and decorated with plaster and tile.
The addition of small panels of glass into the timber windows became increasingly common.

This is the most spectacular style, particularly in the extensive use of plaster, tile, and cast-iron ornamentation. Each upper storey facade has three windows with minimal wall in between for maximum ventilation.

Shophouses of this style are simpler and more streamlined as builders began to cut down on the use of ornamentation; perhaps as a reaction to the exuberant spirit of the Late style and to the economic situation of the time.

The Art Deco style is typified by the streamlining of classical motifs such as column orders, arches, and pediments into geometric designs. A common feature is a plaque with the date of the building’s construction. Shanghai Plaster (A mixture of cement, sand, and crushed marble gives the appearance of solid stonework) also a popular surface treatment.

Common features are the innovative use of thin concrete fins and air vents which are functional as well as
decorative. Flat roofs became the norm. Mild steel windows complemented the geometric facade.

Shophouse Malaysia vs Singapore: Parts Of A Shophouse

2.The Columns at the front of the building form the five-foot way colonnades and support the upper floors.

3.The Five-Foot Way serves as a sheltered space for circulation. It is an important element that contributes to the experience of walking through a conservation area. Owners are encouraged to keep or reinstate the traditional floor finishes as this contributes to the overall character of the building and street. Pedestrian safety should be taken into account when installing fixtures such as letterboxes. Sharp corners and projecting surfaces should be avoided. Preferably, such fixtures should be integrating into the design of the building. We should keep the five-foot way clear for pedestrian flow.

4.The Timber Windows on the upper storeys are either French windows with internal balustrades or casement windows with timber shutters.

5.There is either a Residential Front or Shop Front at the first storey, depending on the original building use. A Residential Front, as shown, typically has a central door with windows on both sides. All buildings with Residential Front which is existing and/or identified in the Specific Façade Restoration Guidelines (SFRG), regardless of land-use zoning, shall be retained and restored.

6.The Airwell opens directly to the sky to provide natural ventilation and lighting to the interior.

7.The Rear Court is where service areas such as the outhouse are traditionally located.

Shophouse Grille In Singapore That You Should Know
Notice: Undefined offset: 1 in /var/www/html/wp-content/themes/houzez/houzez/framework/functions/helper_functions.php on line 2226