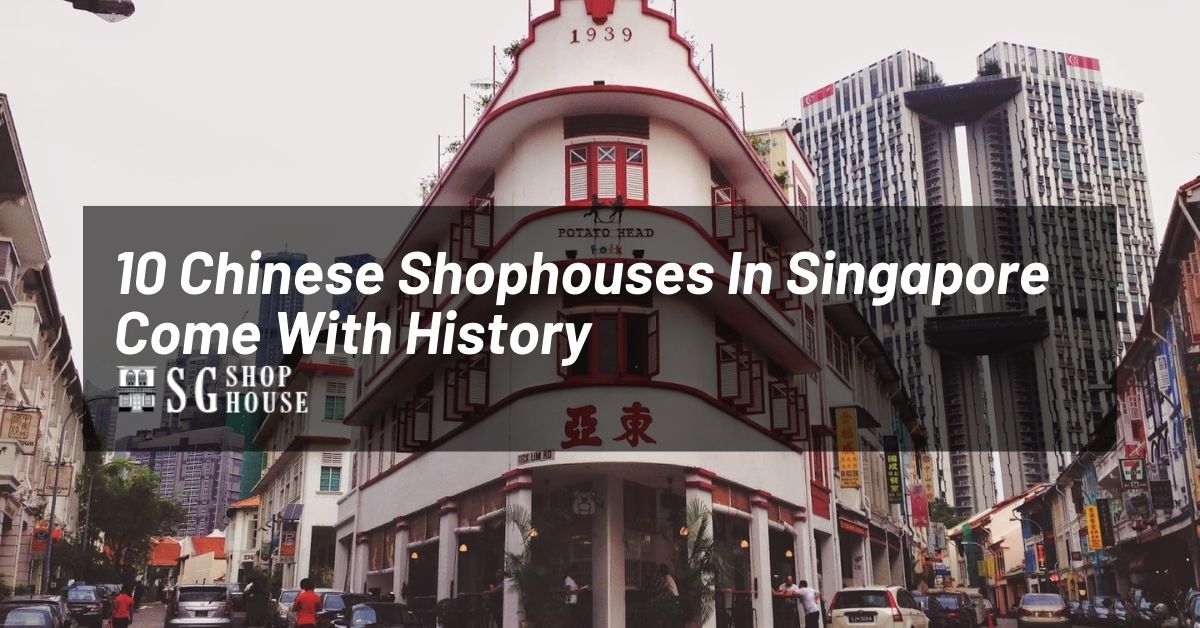 Chinese shophouses were built from the earliest days of Singapore’s founding as a British trading settlement to serve the commercial and residential needs of Chinese immigrants who came in various waves. The first generation of shophouses built in the 19th century were simple two-storey structures designed for functionality with minimal ornamentation, reflecting the working-class status of the occupants. Despite the focus on aesthetic economy, the architectural style of these buildings was influenced not just by southern Chinese traditions, but also incorporated European classical elements and Malay influences such as columns and louvered shutters respectively. This unique hybrid style has evolved over the years, reflecting the cosmopolitan nature of a migrant society. The historic district of Chinatown grew from the Chinese settlement known as the ‘Chinese Campong’ designated by Sir Stamford Raffles in his 1822 Town Plan for Singapore. Located on the southwestern bank of the Singapore River, the settlement initially covered an area of one square mile and was separated into zones each occupied by a particular Chinese dialect group. Major development of the district began in the 1840s following the granting of more land leases to build shophouses, and by the turn of the century, overcrowding and congestion were commonplace in the area. Starting from the mid-1960s, many of Chinatown’s residents were moved to new housing estates as part of the government’s urban renewal and resettlement schemes. Major upgrading works on the shophouses in Chinatown were carried out in the 1980s and many of the street hawkers in the area were moved to the Kreta Ayer Complex. In 2002, the Singapore Tourism Board opened the Chinatown Heritage Centre along Pagoda Street to showcase the area’s long history. There are 10 Chinese shophouses in Singapore come with history.

Built-in 1910, this is the first Eu Yan Sang outlet in Singapore set up by Eu Tong Sen. Besides dealing in the retail of traditional Chinese medicine, it used to offer money remittance services to China. The Chinese Shophouses building was designed by Alfred Bidwell from the firm Swan & Maclaren. He was also responsible for the design of the Raffles Hotel and Victoria Memorial Hall.

This Chinese Shophouses former hotel was designed by architectural firm Swan & Maclaren and was once regarded as the Raffles Hotel of Chinatown. Popular with high society including celebrities from Hong Kong and China, it was once the tallest building in the area and was the first Chinese hotel in Singapore to boast a lift service.

The Chinese Shophouses association was founded in 1879 at Upper Cross Street with financial assistance from Hoo Ah Kay, a well-known community leader from the Whampoa district in Guangdong province. The association relocated to New Bridge Road in 1917. The building is a hybrid of NeoClassical and Art Deco styles which were popular with Chinese developers in the past who wanted to project a modern image. To the Chinese, New Bridge Road was colloquially referred to as Da Po Er Ma Lu, Mandarin for Greater Town’s Second Road. The first road referred to in this instance was South Bridge Road.

The Chinese Shophouses club was founded in 1895 by a group of Hokkien community leaders for the wealthy Chinese elite. More than a social and business club, its members were actively involved in the political development of China in the early 20th century. It supported the 1911 Xinhai Revolution which overthrew the Qing Dynasty, leading to the establishment of the Republic of China. During World War II, it was the headquarters of the antiJapanese China Salvation Movement in Southeast Asia. The ground floor Pioneers’ Gallery is open for visit and entry is free.

The Chinese Shophouses building was built in 1903 by the Municipal Council as the administration centre for rickshaws, a form of transportation imported from Japan via Shanghai in the 1880s. It is of the Edwardian style, where the exposed brickwork is contrasted with white plaster mouldings. Look out for the crest of the Municipal Council at the front of the building, featuring a lion standing on an island with a palm tree.

Built-in 1887, this three-storey former theatre Chinese Shophouses building with unique cantilevering wooden balconies was the centre of entertainment in Kreta Ayer until it was badly damaged during World War II. Its popularity was such that surrounding streets were colloquially named after the theatre itself; Smith Street was Theater Street, Temple Street
was Theater Rear Street, and Trengganu Street was Theater Side Street.

This Chinese Shophouses was originally a Cantonese opera house built by philanthropist Eu Tong Sen in 1927 for his wife after she was reportedly refused admittance to an opera performance elsewhere. A highlight of this Art Deco building is its decorated façade of hand-painted tiles depicting opera characters and flying dragons. 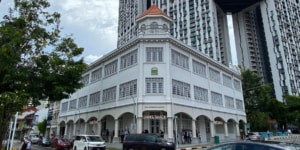 Chinese Shophouses Eng Aun Tong (Hall of Everlasting Peace) was built by Aw Boon Haw in the 1920s as a factory to produce the internationally renowned Tiger Balm. This is one of the few flat-roofed buildings from before World War II. On the roof is a six-sided pavilion, a reference to the six-sided glass bottle that Tiger Balm is sold in.

This Chinese Shophouses association was established in 1918 by immigrants from Jinjiang County in southern Fujian, China. The current building contrasts with its ornately decorated neighbours. The use of straight lines, concrete ledges and mild steel-framed windows are typical of the Modern style that was popular from the 1950s to the early 1970s. During World War II, the building was used by the Overseas Chinese General Mobilisation Council which helped the British in supplying labourers and volunteers for the defence of Singapore.

This Chinese Shophouses Cantonese clan association was established in 1839 at Upper Chin Chew Street and moved in 1924 to the present building, designed by Westerhout & Oman. During the Japanese Occupation, the custodians volunteered the building as a clinic and hence its antique interiors remained intact. The association is well known for its lion dance troupe and martial arts. This is one of Chinatown’s first community museums and entry is free.